Following my desire to snowboard in the Northern Rockies and visit Big Sky, MT and Jackson Hole, WY, I clearly had no idea what I was getting myself into. My epic winter road trip to Idaho, Montana, and Wyoming started in Winnemucca, NV, a thriving mining community in the middle of I-80 in Nevada. (I know you had no idea a town with such name existed, I didn’t either until I needed to stop on my way from Tahoe, CA to ID and a buddy invited me to visit for a night.)

My local friend has been on the Rodeo Circuit for a number of years and makes his money riding bucking horses. He was even on the podium a couple years back. The highlight of that pit stop wasn’t visiting a ranch and giving apples to the horses although we did that too, it was going to the hill billy hot springs with the local cowboys and bikers. No, the bikers didn’t shoot the cowboys, and no, I wasn’t thrown off a horse. Offering whiskey from the bottle always smooths the conversation between two groups of Wild West men. #prettydamncool #prettydamnwild

Yes, this is what a hill billy hot spring looks like, Nevada style – cow tub in the middle of nowhere, on private property, open to the public, and steaming hot water flows from an old plastic pipe. #classy #imhomelessbutclean #butwevegotacarpet 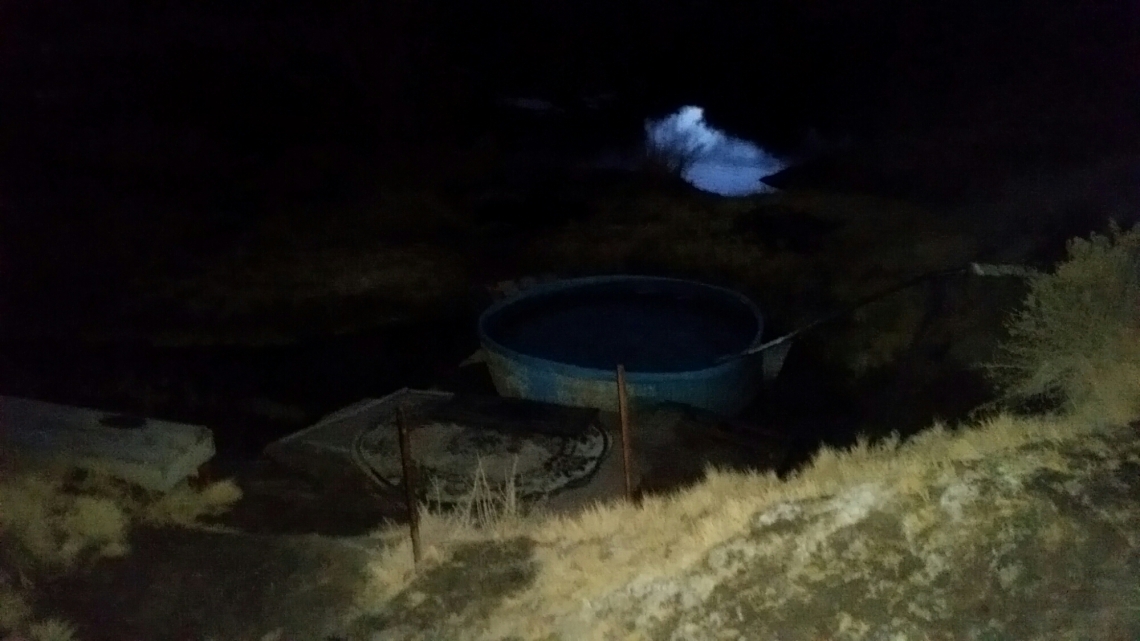 Next morning bright and early I headed from Winnemucca towards Twin Falls, Idaho. I had to cross Battle Mountain pass and preferred to do it before a winter storm hit. NB: even though it is high desert in NV, they don’t clear the roads and wait for the snow to melt. Don’t be caught in a snow storm! ❄

Did I know where Twin Falls was? Not really… Did I know it existed before I started my drive? No. All I had heard about Idaho was that they grew potatoes and that Boise and Sun Valley were the “new” hot spots for Hollywood celebrities. 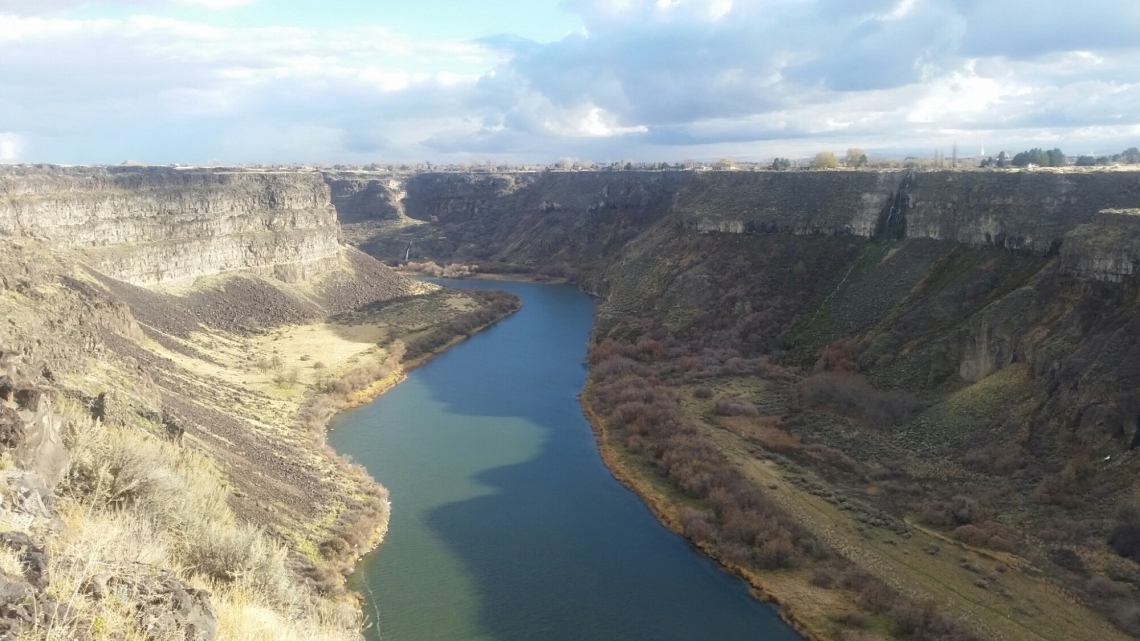 The overlook in Twin Falls, ID is on the north side of the Perrine Bridge. The power of the water digging into the earth for millions of years to create such a deep canyon will blow your mind. Apparently the bridge is a favorite destination for fearless BASE jumpers as it doesn’t require a permit and is open year round. (Please don’t jump…especially in the brutal Idaho winters.)

Heading north my next destination before dusk was Craters of the Moon National Monument. (Note to self – everything out West is WAY farther than it appears on the map/GPS. Around the corner is usually a 2 hour drive as the “corner” is a dirt road with no winter access) The entrance to Craters of the Moon National Monument is on the north side of the park on Hwy 26. There are a couple of Vista Points before you reach the park entrance that are worth stopping at, reading the signs on geological history and rock formation, and taking a few pictures. This is the youngest park in the National Park system as it was formed just 2,000 years ago by recent volcanic activity in the area. The Monument is gorgeous in every season, part of the roads are closed in off-season, so I plan to return in summer and explore the remote parts of the park. For now enjoy images of white snow sprinkled over black volcanic rock, it was VERY monochromatic! 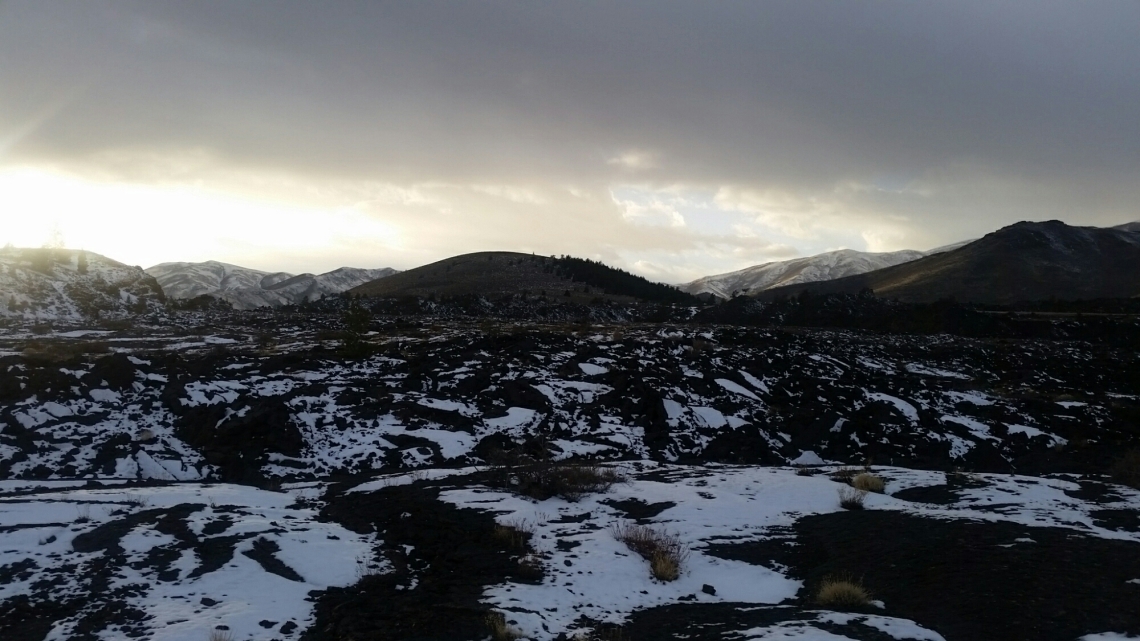 I had made plans to spend the night in Pocatello, ID and that ended up being another “around the corner” location that I reached 2 hrs later. For future visits, I’d choose Idaho Falls which seems a little closer to the park entrance and a little smaller than Pocatello. Besides for a college with a “bustling” student community (I use “bustling” loosely here) and a couple of coffee shops, there wasn’t much else to see in Pocatello. Idaho Falls is one of the “gateways” to Grand Teton National Park and Yellowstone National Park on the Idaho site. You are much better off staying in Driggs or Victor and you still need to pass Teton Pass, which is often impassable in winter no matter what vehicle you drive, but Idaho Falls is more affordable if price is a factor in your trip.

Next day I headed up from Pocatello through the Caribou-Targhee National Forest to West Yellowstone, Montana. I hadn’t made a plan to stop at Grand Targhee and snowboard, another destination left for next winter! (If I can pass Teton Pass that is 😨) Driving on Hwy 191 from West Yellowstone to Big Sky, MT is absolutely insane. It is a 2 lane road that takes you through Yellowstone National Park, you see semi trucks every 5 min speeding by, the road is completely snow covered December to April, make sure your tires have thread, even better if they have studs. Have you watched the TV show “Ice Road Truckers”? Well, I lived it…❄

West Yellowstone, MT is the Western-most entrance to Yellowstone National Park. The entrance is closed in winter however I was able to visit the Grizzly and Wolf Discovery Center and see bears and wolves in their natural habitat. All animals in the refuge have been rescued and are unfit to be re-introduced to their native environment due to a number of reasons. I got a chance to speak with the Wildlife Ecologists and learn about bears, wolves, bald eagles, how to preserve the environment and what to do in case of an attack. FIRST, prevent it. Attacks on humans are VERY rare, basically you must be really lucky to be mauled by a bear/wolf or you must be VERY dumb. Don’t be like Bob 🐻.

This is the largest male bear they have in the center! 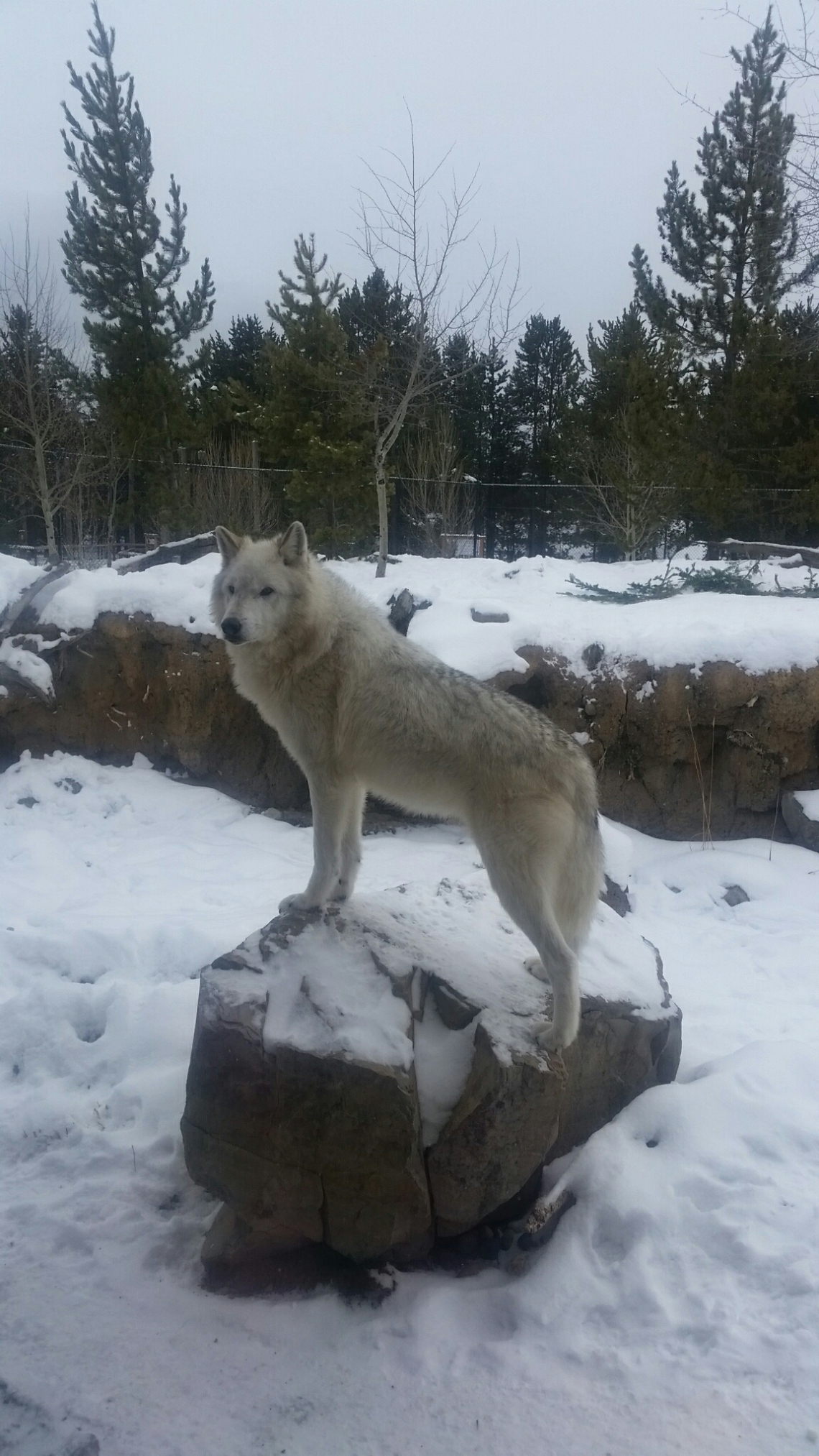 The original “husky” aka grey wolf!

All the residents if you’d like to meet them close and personal. 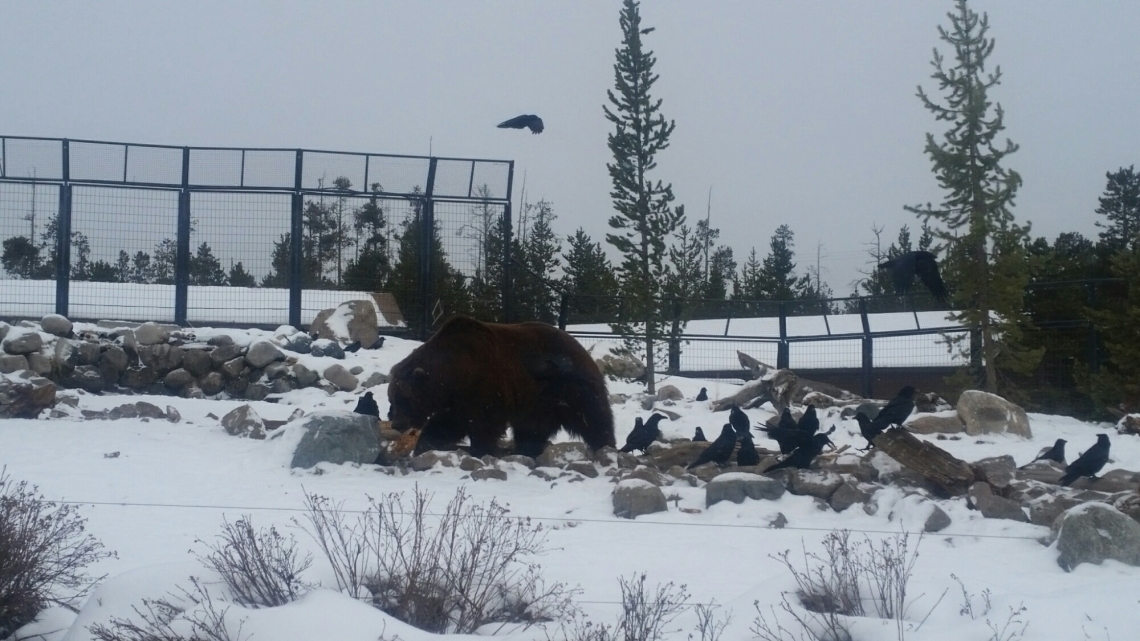 Last but not least, the golden eagle. You’d be surprised how often you’ll see golden and bold eagles in the wild out West.

While in town I stopped by a couple of really cute local shops that were recommended to me at the Visitor Center. Always check the local bookstore 📚! And off to Big Sky, MT I went. Snowboarding for 4 days. Big Sky is extremely remote, even from Bozeman. Lone Peak is named that way for a reason. Better not ask me how the roads were…next time I go, I’ll make sure I drive an assault vehicle. 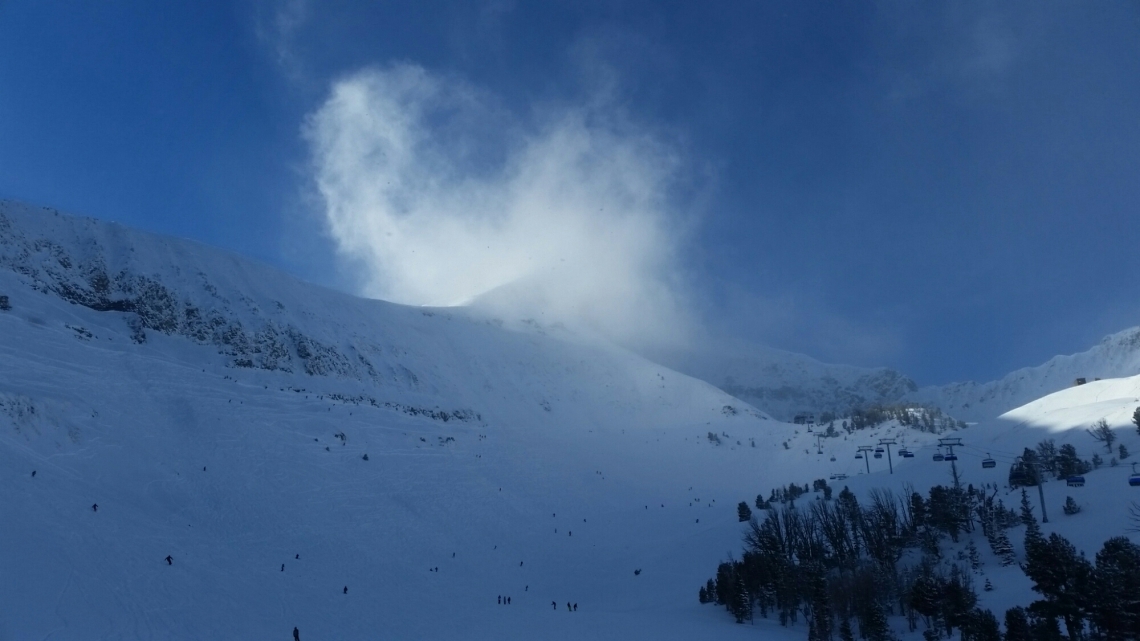 After I was done with my Big Sky snowboarding adventure, I headed to Bozeman, MT to visit the local hot springs. #onemustsoak You can choose from Bozeman Hot Springs in Gallatin Gateway (these places ARE as remote and isolated as they sound) and Chico Hot Springs in Livingston, MT on Hwy 89 towards Yellowstone’s North Entrance. (Little trick from a weary traveler – use the hot springs to shower if car time or camping has left you slightly unsightly 🛀) I prefer the Chico Hot Springs, they are more authentic and remote, in case you prefer NOT to see people. (Don’t worry, you won’t anyways in Montana 😱) Bozeman is another “bustling” college town with museums, craft breweries, and a couple of distilleries. Visited a museum, stopped by a distillery and I was out. 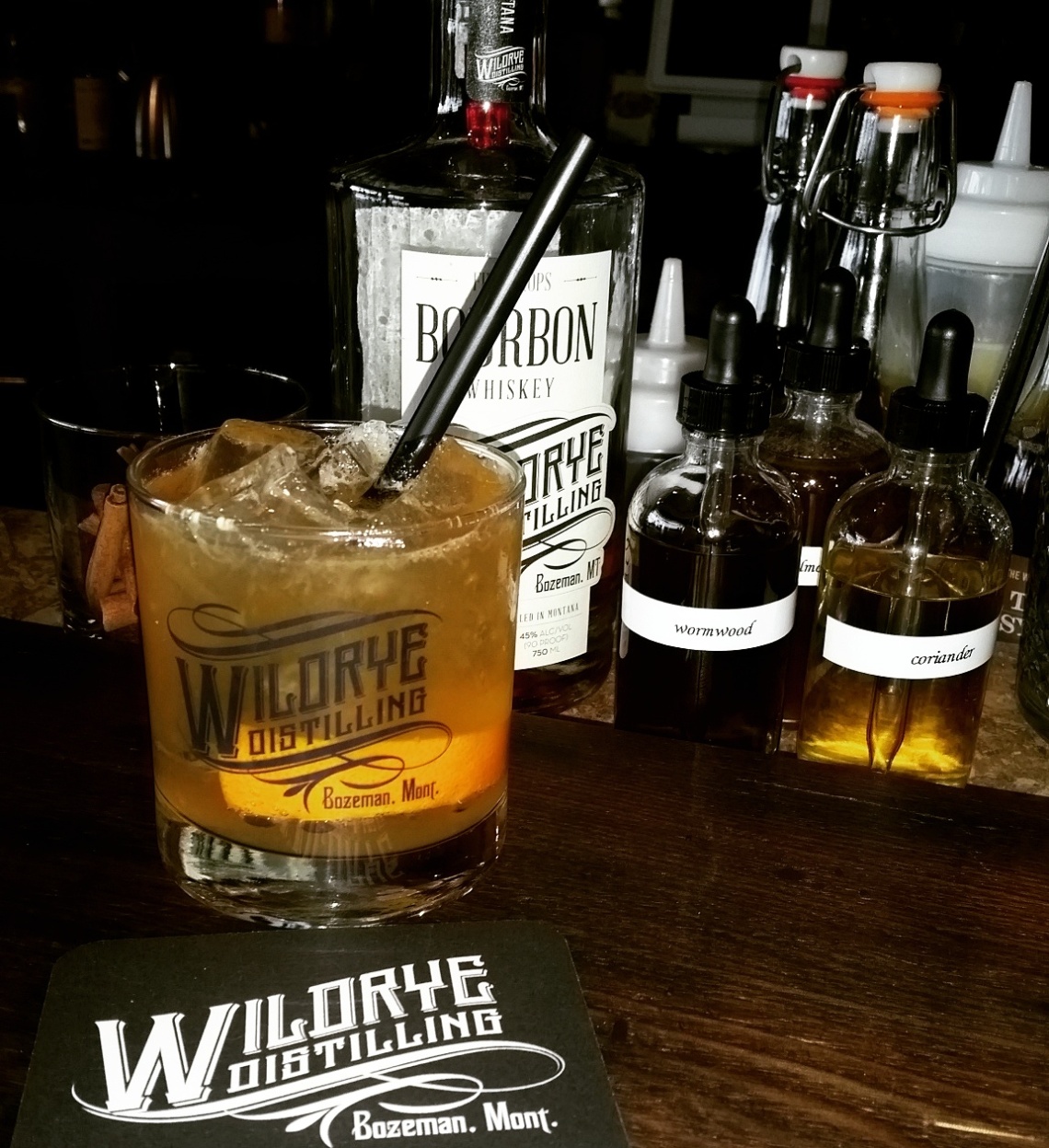 Swam at Chico Hot Springs in the morning and made it to the North Entrance of Yellowstone mid-day. Only part of the road into the park is open in winter, so I was able to look only at the frozen Mammoth Geyser Terraces. Next on my list was wolf watching in the extremely remote and cold Lamar Valley. Don’t visit in winter unless you REALLY love wolves or know what you are doing. (For me it was the former.) #doasIsaynotasIdo #crazywolflady It was SO cold my camera didn’t work. Honestly, I didn’t function either, I still wonder how my tiny FWD car didn’t stop running. #blessyourFITheart

Road to Lamar Valley – park rangers tell you you are on your own, AAA will not come dig you out and your phone has no reception to call them anyways. 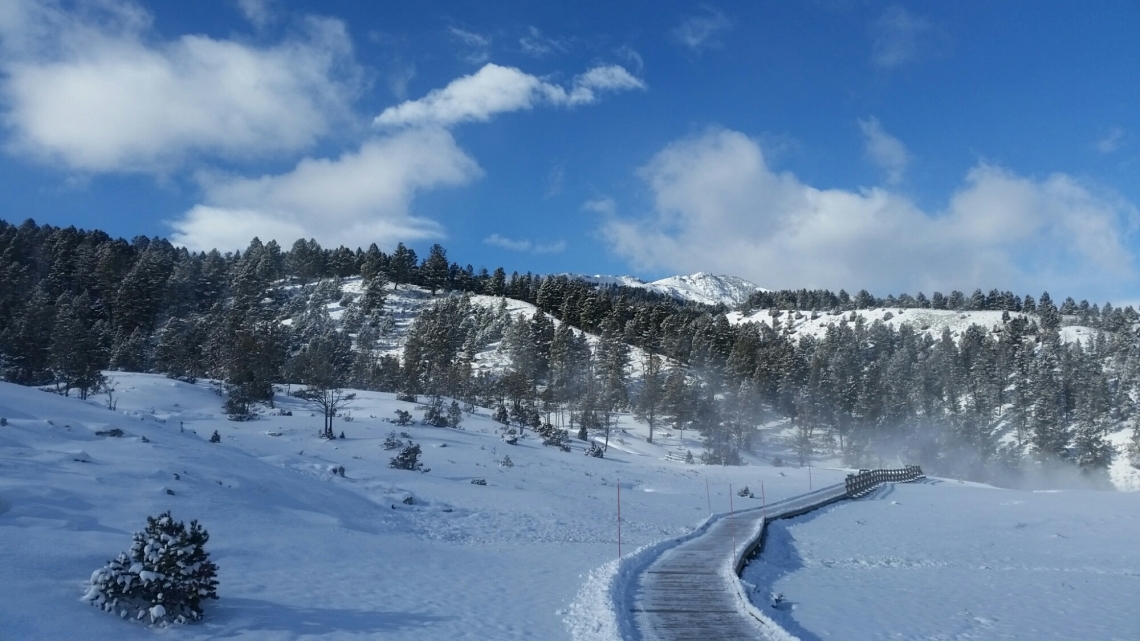 Oh, you bet I went hiking, frozen or not!

I was able to make it out of the park before dark and arrived in my next stop – Cody, WY around 8pm in pitch black, snow covered, frozen roads. It was -25C next morning when I woke up to leave for down south. The drive involved either semi circling an extra hour in the opposite direction to take the highway or a direct cut south via “the road less traveled” aka county roads. When I use the expression “my way or the highway” please take the highway in winter. If you end up in that central Wyoming neck of the woods, stop by Thermopolis to grab some food and visit the hot springs. #igotahotspringsproblem A whole county is named after ’em hot springs after all!

The only solace of driving on frozen snowpack for 6-7hrs was the striking beauty of the desolate Wind River Canyon. The canyon is a cold, winding road covered in a sheet of ice with cold steam rising up from the river. You may see another car if you are lucky. In the 30 or so miles in the canyon I didn’t. I was sliding by myself across a 2 lane road with vertical canyon walls on one side and a roaring river on the other. Still that is probably one of the most beautiful drives I have done and I will most definitely repeat in summer. 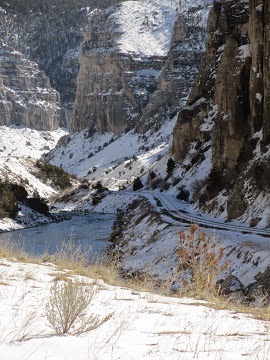 Next stop on my itinerary was Jackson Hole, Wyoming #onemustsnowboard #girlwithasnowboardingproblem which has only one entrance in winter, well two to be exact but the Teton Pass from Victor/Driggs, Idaho is impassable more often than not and I wasn’t testing my luck with a compact FWD car. Read more about Jackson Hole here. 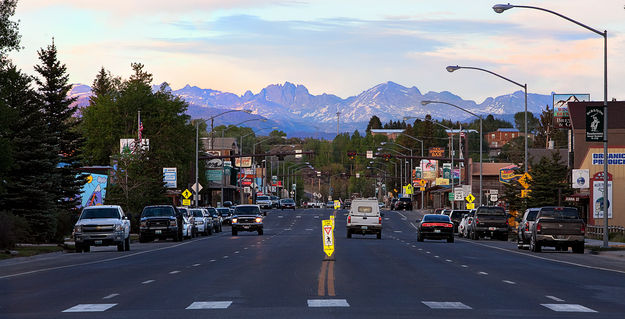 Last but not least, on my way from Jackson Hole, WY to Steamboat Springs, CO, I gassed up in Pinedale, WY which is said to be the gateway to the Wind River Range and a hidden gem for fishing, climbing, rafting, kayaking, hiking, etc. Pinedale’s motto is “All the Civilization You Need” and it is as Wild West as it gets in town form. Wind River Brewing Co. had the best reviews online so I stopped there for a cocktail and some lunch!

And all I got to say about Rock Springs, WY is gas is cheap. Don’t mind the characters at the gas stations. You are very close to Indian reservations, “character” is to be expected.

I am Maria, born and raised in Bulgaria, world traveler since the age of 3, outdoors aficionado since the age of 23 (better later then never), aspiring surfer and snowboarder, former exercise and fitness junkie, mindful yoga practitioner, amateur dancer, wellness and nutrition follower, strong believer that everything is possible, loving life and riding it gently on a natural high! View all posts by Bulgarian Mermaid