Twice named “Happiest Country in the World” and identified as the greenest country on the planet, Costa Rica is the global leader in eco travel and adventure tourism. Costa Rica is half the size of Nicaragua and half the population yet there is so much to see in this tiny country that even a month is not enough. It is the most visited nation in Central America with 2.9 million foreign visitors in 2016 and one of the few countries that focus on preservation of nature and renewable energy. Around 25% of the country’s area is in national parks and wildlife sanctuaries, the largest percentage of protected areas in the world. Costa Rica also possesses the greatest density of wildlife species.

By 2016, 98.1% of the country’s electricity was generated from green sources (hydro, solar, geothermal and biomass) and by August 2018 the country was running completely on renewable energy and exporting green energy to its neighbors. Costa Rica does not cut trees for paper and has successfully managed to diminish deforestation from some of the worst rates in 1973- 1989 to almost zero by 2005. 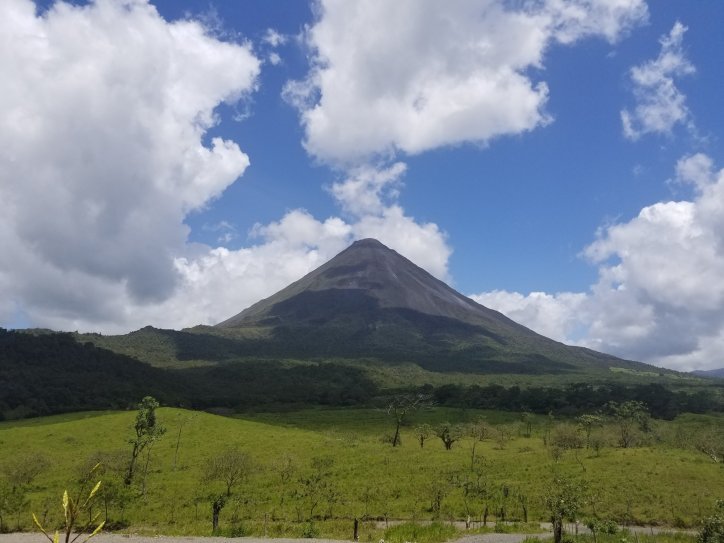 Costa Rica also ranks high on longevity. Nicoya Peninsula in Guanacaste province (where Rapture Surfcamp is located) is one of 7 “Blue Zones” in the world where people live healthiest and longest. According to research, the main factors that contribute to such longevity are: staying close to nature, climate, family, faith, and farming. 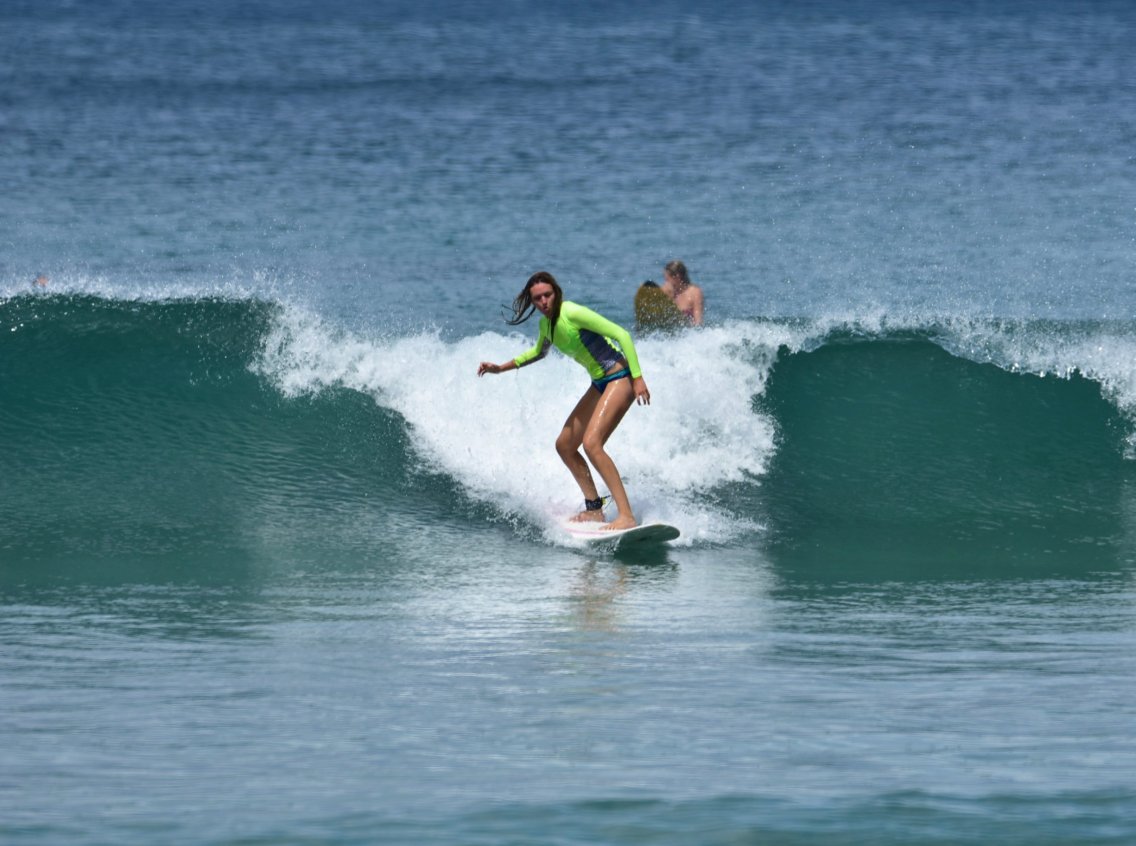 Where is the beauty of not being rich in mineral resources you may wonder? For Costa Rica it was the opportunity to avoid colonization 🙂 Lack of resources such as gold and silver made Costa Rica into an isolated and sparsely-inhabited region within the Spanish Empire. Costa Rica was described as “the most miserable Spanish colony in all America”. Another important factor behind Costa Rica’s poverty was the lack of a significant indigenous population available for slave labor, which meant most of the Costa Rican settlers had to work their own land and couldn’t establish large plantations.

Unappreciated and overlooked by the Spanish Crown and left to develop on its own, it was not long before the early settlers turned to the hills, where they found rich volcanic soil and a milder climate than the lowlands. Costa Rica became a “rural democracy” with no oppressed mestizo or indigenous class and abolished the army in 1949. 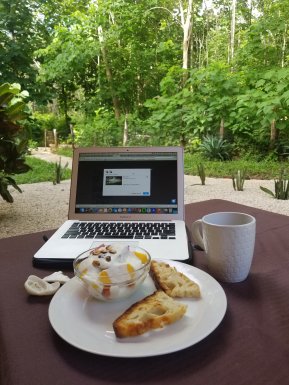 When you think of Costa Rica you may imagine endless beaches fringed by palm trees and while that is exactly the scenery on both coasts, in between there are numerous national parks, volcanos, cloud forests, wildlife reserves, waterfalls, and hot springs. So unless you spend at least a week in the middle of the country, you can’t really say you’ve seen Costa Rica. There are 14 known volcanoes in Costa Rica (compare that to 50 in Nicaragua), and 6 of them have been active in the last 75 years. I visited 2 – Rincon de la Vieja and Arenal – both active. 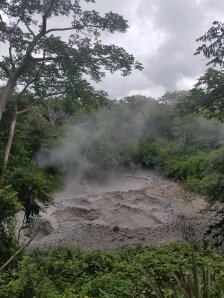 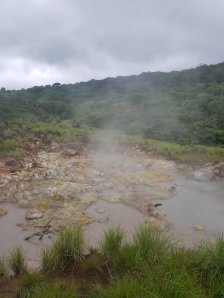 Rincon de la Vieja National Park is one of the driest in Costa Rica with one of the most endangered ecosystems. The active 1900m volcano is like a small Yellowstone with mud pots, boiling hot springs and other geothermal and volcanic features to be observed. If planning to hike a waterfall, choose La Cangreja for its sparkly blue lagoon where you can go for a swim. It is a 6km one way hike, so give it at least half a day and remember it gets dark early in the jungle. 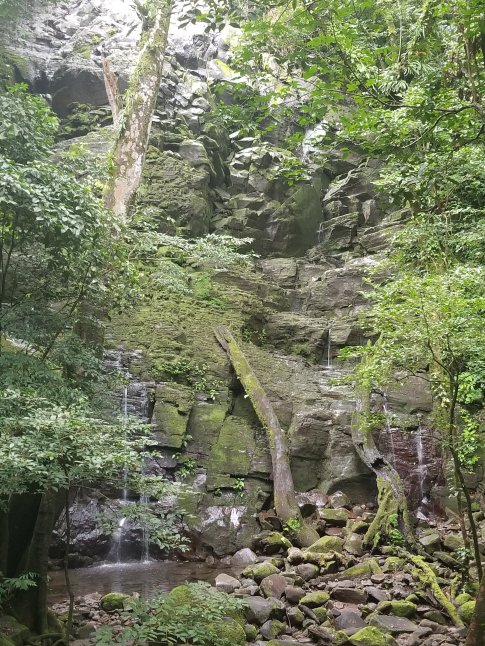 Hacienda Guachipellin has the most amazing hot springs I’ve EVER been to! Experience the hot, hot, hot water (up to 120F) in a secluded natural setting alongside the river. Yes it burns, it also cleanses your pores and disinfects your wounds (comes handy for injured surfers 🙂 ) Try volcanic mud face mask and body painting, refresh yourself with a cold dip in the river ❤ To reach the hot springs you will drive for a while in the middle of nowhere. Don’t be discouraged, there are hot springs at the end of the forrest tunnel 🙂 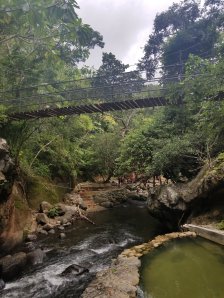 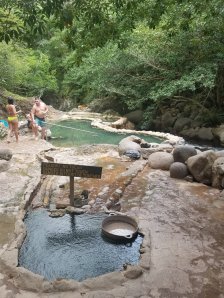 Arenal Volcano last erupted in 1968 and formed hot springs at its base. The geothermal water, the volcanos (you can hike the Chato crater) and the proximity to the airport have turned the area in an overcrowded tourist attraction. If you decide to head that way, I recommend staying in Arenal (outside of La Fortuna). Hike a volcano or take a horseback ride around it, dip in the hot springs, see the waterfall, swim in the magma heated river, maybe do an outdoor adventure, THEN get out of there. 2 nights are enough 😉

On your way between Rincon de la Vieja and Arenal or from Arenal to Monteverde, stop by Rio Celeste for a day. The drive is long but it is a spectacular, once-in-a-lifetime sight. 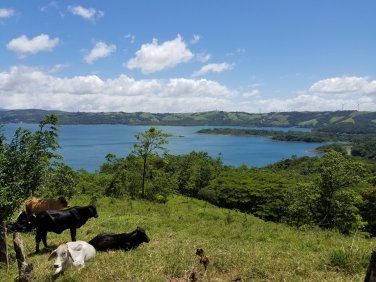 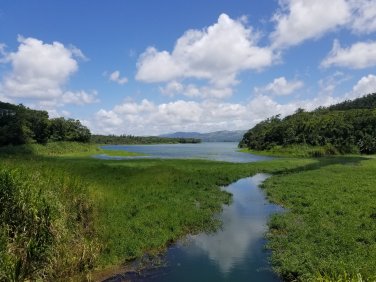 Monteverde is my favorite part of inland Costa Rica. Stay 3-4 nights and plan to be busy with every type of nature and adventure tour you have heard of (and even some I couldn’t imagine before – orchid garden anyone?! or observing nature at night (fluorescent frogs 🙂 ), making your own molasses out of sugarcane, riding a cacao-grinding bicycle ?!) To book your tours, stop by Ro at Monteverde Downtown Hostel (even if you are not staying there) and follow his advice. He was SO spot on I was able to see half of the local attractions with the most authentic vendors in 2 days. 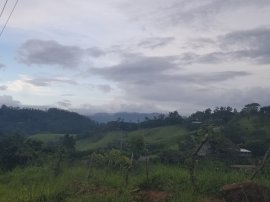 Monteverde is the only place in the world where you can still observe an unspoiled cloud forrest – you have 3 public parks to choose from and a number of private reserves. Named after the clouds that travels east to west from the Caribbean to the Pacific and stop in the treetops of Monteverde, the cloud forrest produces water instead of using it. 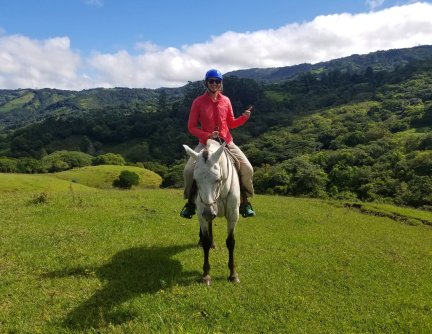 The Continental Divide that dissects Costa Rica north to south also passes through Monteverde. Since I visited the Divide in Wyoming, Idaho, Montana, and Colorado, it was time to see it in Central America too. The Continental Divide splits the watershed into rivers that flow into the Atlantic and the Pacific. 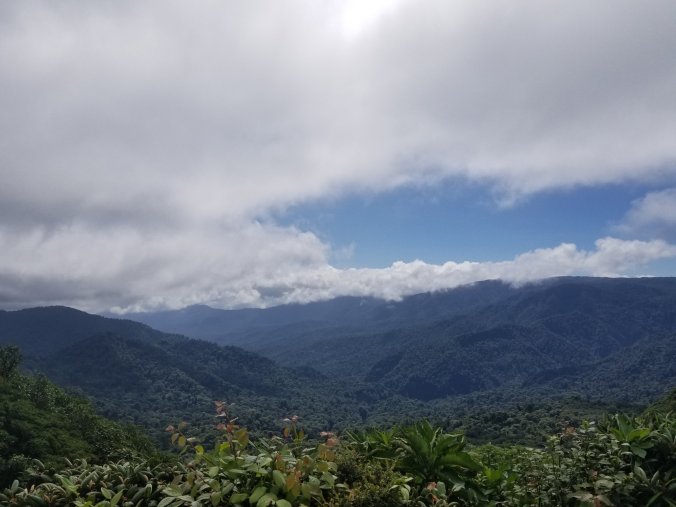 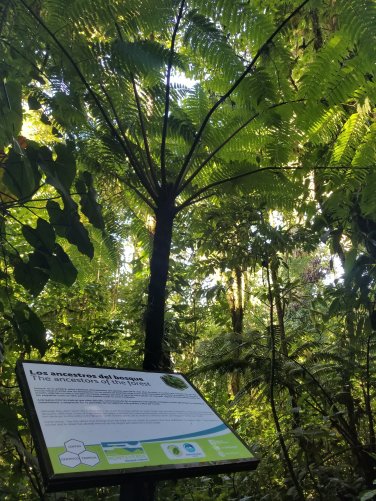 A tour of the Orchid Museum was another highlight of my visit. I got to learn so much about these incredible flowers (jungle weeds to be exact) and I also stopped appreciating or buying the “supermarket variety”. While the orchid flower in nature lasts only a few days, the supermarket type can last for months. It is a hybrid which needs fertilizer once a week to once a month. The original color is actually white and the blue, pink, or purple hues are achieved with food coloring in the roots. First flowering is bright color, next one is color and white and the last one is completely white. PLEASE don’t buy them 😦 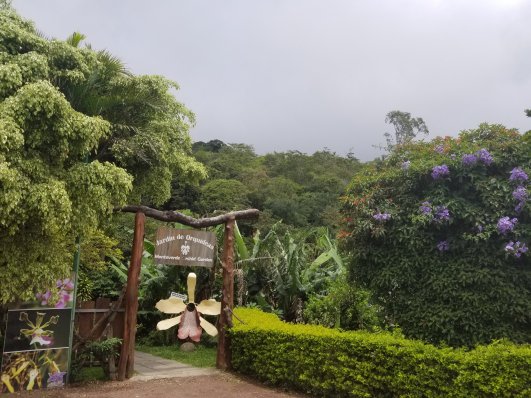 There are 30000 different orchids in nature and 1500 of them grow in Costa Rica. Ecuador has the largest number of species in the world in a single country (5000) while Monteverde has the most species per square mile. Guaria Morada is the national flower of Costa Rica. Orchids need indirect sunlight and water. Lower elevation orchids need water once a week, the mountain species need water every day. 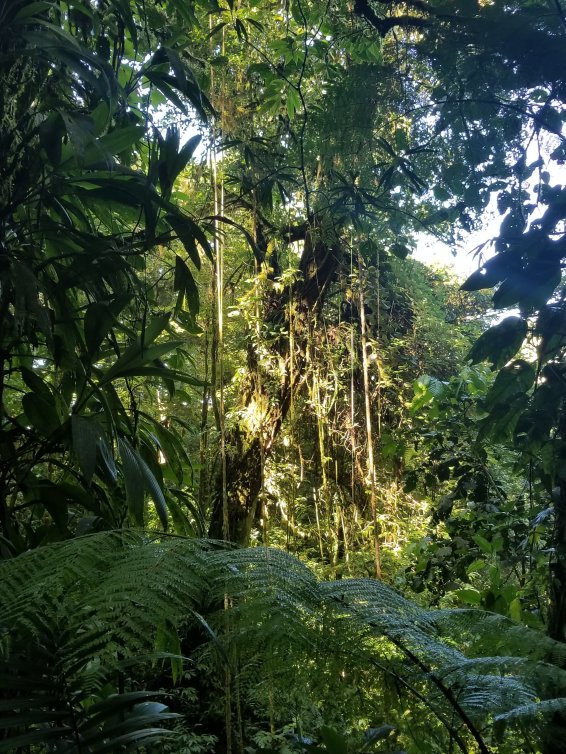 The second largest sector of the Costa Rican economy is agriculture with bananas, plantains, pineapple, coffee, sugarcane, and exotic fruits being the main exports. Costa Rica is the 2nd largest pineapple producer in the world with >50% of the international market. 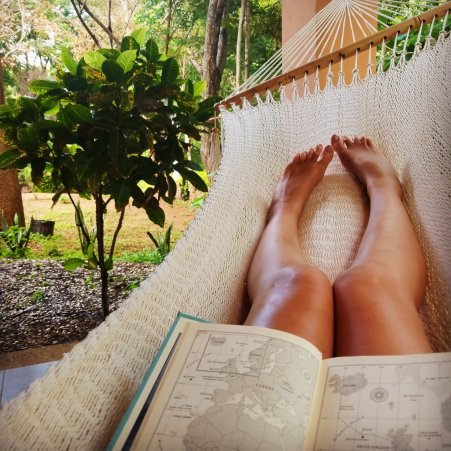 Sugarcane is non-native to America (Columbus first brought it to the Caribbean) but it grows really well in hot, humid climates. “El Trapiche” means sugar cane mill. While it is not typical in Costa Rica any more for small family plants to process the harvested sugarcane, it used to provide livelihood to many early settlers. Since harvesting the sugarcane is not only very laborious but can also be quite dangerous process (sharp leaves, snakes, insects) other countries burn the sugarcane plantations first and then harvest them. The stem contains all the sugarcane juice so it doesn’t burn but the fire takes care of the dangers on the ground. 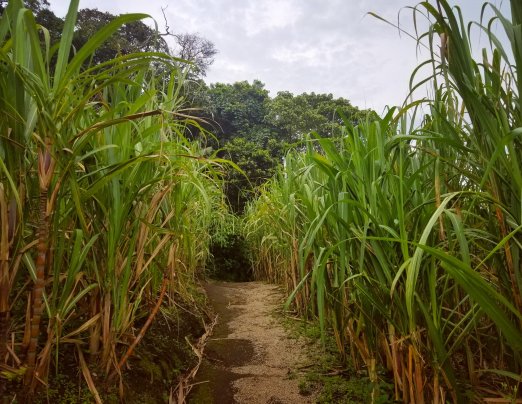 Growing coffee is very popular in Central America with Costa Rica being one of the most famous producers in the world for single-origin high-quality coffee. All Costa Rican coffee is of the Arabica kind grown at over 1000m elevation. Take a tour of a coffee plantation in Monteverde to learn more about coffee growing and roasting processes!

Since going to the beach is an essential part of your visit in Costa Rica, here is a quick run down of the coast in the Guanacaste region. If you plan on surfing, add an extra week to your vacation, better yet add 2 weeks to properly enjoy the beach and learn new tricks 🙂 And go visit Rapture Surfcamps in Playa Avellanas! (Aka the surf camp with the most amazing sunsets 🙂 ) 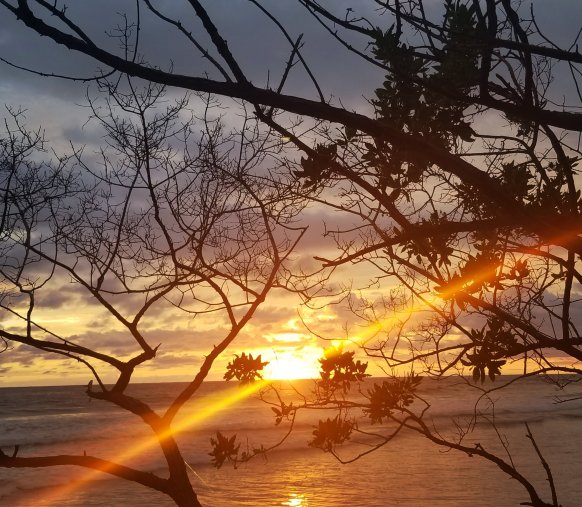 Tamarindo is the party capital of the Guanacaste region. The local population of 500 swells up to 5000 with tourists in high season. My favorite night in Tamarindo was the Thursday Night Market (part of Rapture Surfcamps weekly activity schedule :-)) Another place I love in town is El Chiringuito Restaurant between Playa Tamarindo and Playa Langosta. Lunch, drinks, and sunset views are to die for! If you in the area during the day, take a tour of Las Baulas Natural Marine Park to see turtles, crocodiles, monkeys, birds, and other wildlife. Boats leave twice a day with exact time depending on the tides and it costs $25 p/p for group tours.

Playa Flamingo is one of Costa Rica’s most famous beaches for it crystal clear waters and pink skies at sunset. When visiting, have a meal at Loco Coco, it is absolutely delicious! Other famous beaches in the area are Playa Negra (filming spot of Endless Summer II), Playa Conchal (not sand but tiny shell pieces), Playa Hermosa (black volcanic sand), Playa Coco (great scuba diving and snorkeling spot), Playa Grande.

What I didn’t have the time to see but came highly recommended was Manuel Antonio National Park, Corcovado National Park, the village of Puerto Viejo on the Caribbean coast, Tortuguero National Park, Montezuma, Malpais, and Santa Teresa on the tip of the Nicoya peninsula and riding the ferry from Punta Arenas to Paquera (closed due to a strike when I was visiting). 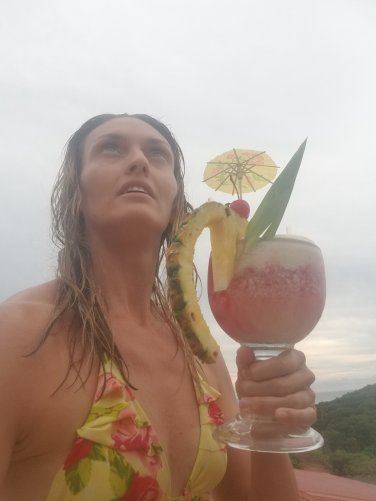 You tell me now how a 2 weeks vacation is enough for Costa Rica? I suggest you take a month off, explore the country and send me info on everything I have missed!

I am Maria, born and raised in Bulgaria, world traveler since the age of 3, outdoors aficionado since the age of 23 (better later then never), aspiring surfer and snowboarder, former exercise and fitness junkie, mindful yoga practitioner, amateur dancer, wellness and nutrition follower, strong believer that everything is possible, loving life and riding it gently on a natural high! View all posts by Bulgarian Mermaid